At the edge of Gallows Hill, close onto the city line with Peabody (around the corner from the vintage Salem-South Danvers boundary stele), stands an apartment building that once housed the Epes Grammar School (variously Eppes school).

The date of 1841 makes it the oldest school in the Gallows Hill neighborhood, and darn near the oldest school in Salem still standing. The Oliver School at 3 Broad St near downtown is older, but it’s constructed of durable brick, not perishable wood like the Epes School.

The Oliver School was built in 1818 not as a grammar school but as the Classical High School, hence more care was put into its construction. It did not become a grammar school until a new high school opened in 1855 next door at 5 Broad St. The erstwhile high school at 3 Broad was then repurposed as the Oliver Grammar School, named for Gen. Henry K. Oliver, former Salem schoolteacher and eventual mayor of Salem.

None of these public schools along Broad St had a schoolyard, instead relying on the Broad St cemetery next door for outdoor recreation (ugh). The Epes school at least had a spacious recreation yard, large enough for ball games at recess. Today the Epes apartments are surrounded by spacious grounds not often found around other small apartment buildings in Salem.

Nearly an acre of ‘recreation’ space about former Epes School

At any rate, the Epes School stands off Aborn St as the oldest wood grammar school building still standing, still occupied. Today it is a modest 4-unit apartment building, unremarkable unless one notices the tattered historical marker high up on one wall.

Apparently the Epes School lasted as a grammar school until around the turn of the last century, whereupon it was closed and converted to residences. The Oliver School did not remain as a grammar school much past that date, passing through a series of municipal uses before reaching its current municipal incarnation as the J. Michael Ruane Congregate Residence, basically assisted living for needy senior citizens run by the Salem Housing Authority.

The replacement high school next door itself went through multiple municipal incarnations after a new high school opened at 29 Highland Ave on Lookout Hill in 1909. A few years later the new high school witnessed the passing below of the great Salem conflagration of 1914. For the last 50 years the 5 Broad St high school served as the Salem Senior Center, supplemented just this week by opening of the new Senior Center at 401 Bridge St in Gallows Hill. Read long enough and eventually this blog post circles back around to Gallows Hill. The former Senior Center on Broad St stands ready to accept its next incarnation.

The Epes School this year has gained increased attention given a resurgence of interest in the life and times of Charlotte Forten, the foremost African-American female intellectual of the 2nd half of the 19th century. She was the first African-American graduate, in 1856, of the Salem Normal School, predecessor of today’s Salem State University, indeed one of the first graduates ever, since Salem Normal School only opened in 1854. A museum dedicated to Charlotte Forten opened earlier this year on campus, taking over the premium space once occupied by the university president. After graduation her first professional position, up until the Civil War began, was teacher at the Epes Grammar School, becoming the first African American hired to teach white students in a Salem public school, perhaps the first anywhere in America.

The Epes School apartments slumber on in a quiet corner of Gallows Hill, its resonant history overshadowed by REALLY historic events that took place a few blocks away on Proctor’s Ledge.

Since early summer a turkey hen with her brood of five nestlings in tow has been patrolling the grounds of Gallows Hill Park.

They have been secretive, coming out only when the large crowds of ballplayers and skate park enthusiasts are absent. The nestlings have grown into fledglings, darkening from cafe-au-lait to a dusky brown more like mother.

Perhaps in the tradition of Make Way for Ducklings they should be given rhyming names. What about Jerky, Murky, Perky, Quirky, and Smirky, left to right. 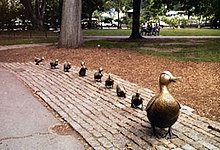 The mother hen unfailingly watches her charges, alert to any predator or photographer who ventures near. With a coyote den atop the hillcrest behind the birds in the photograph it’s a marvel that all five nestlings have survived. Mama has done well. Soon the fledglings will split the nest and find their own park tracts to peck at. Bid them all the best.

It’s been a while since this blog visited the mysterious planters of Blubber Hollow. Two large planters have sat on a weed-infested corner by a rusted abandoned railroad siding of Blubber Hollow for many years now. Periodically some unknown individuals come by and refresh the plants, adding a splash of color and life to an otherwise forsaken piece of property.

For the whole summer the planters have sported flowery vines, undeterred in their blooming glory by the weeds that creep up around the planters. The gardeners remain undisclosed, but from the like vines erupting over the fence across Bridge St, it seems a viable guess that the owners of that property have something to do with the ever-appreciated attempt to beautify grim Blubber Hollow.

The Art and Craft of Blogging

The latest news on WordPress.com and the WordPress community.

The Art and Craft of Blogging

The latest news on WordPress.com and the WordPress community.